Politics aside—what do you think of the branding?

These are, to me, decidedly uninspiring.

It would seem (and I claim no expertise with this category of marketing) that this election and the contrast of views requires candidates that are willing to something different. These designs, in large part, appear to be designed by people who are thinking about what they’ve seen in the past—not creating a brand and approach around a new idea—it is a MAJOR opportunity missed.

Can you imagine a major, well financed new product or service in 2019 that would be rolled out with this weak a branding effort? I can’t. 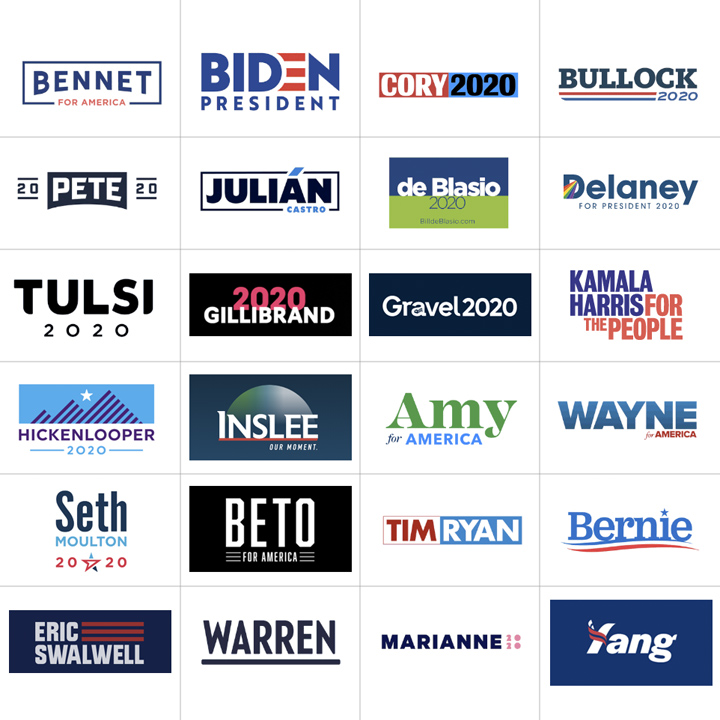 Why hasn’t someone abandoned the use of his or her name and, instead, branded themselves with a big idea? That might get noticed.

Why is no one including some type of logo? Obama’s campaign used the “O” as a sun rising over the horizon with great effect. That might set them apart.

Why is Kamala Harris the only one with any kind of meaningful tag? That serves to attach your name to an idea.

Why are so many using their first names? I feel it’s presumptuous, even egotistical. I understand the candidates want to create and aire of familiarity but, at the same time, none of them are well known enough to assume even 20 or 30 percent of voters will know who they are. Why in the name of heaven would you voluntarily start a two year campaign with that type of obstacle.

Regarding the design of what’s here:

If you’re going to make a type-only mark, please get the kerning right—the letter spacing in ”WAYNE,” “Seth,” and “BETO” is atrocious.

Gravel: I’m sure the symbol in the “a” is clever, but I can’t see what it is—(even on his website).

Hickenlooper: He was the Governor of Colorado, hence the mountain range—what does one state’s mountain range have to do with his brand?

BETO: Again, you could park a tractor trailer in between the “E” and the “T”. If you’re doing type, tweak the hell out of it.

ERIC SWALWELL: Of all the exquisite typefaces on planet earth, how did they end up with this one?

Yang: Initially, I couldn’t tell if that was “Lang” with a flourish of some kind or “Yang”. It’s Yang.

Finally, why use “2020”? It’s as if you’re saying we couldn’t think of some other interesting element or modifier to use, so we settled for the date of the election—get it?

Why, like I mentioned above, aren’t marketers using tag lines and imagery that sets their candidates apart from the field? For example (politics aside), “Make America Great Again” is a brilliant line and it has become a point around which the President’s supporters rally. With all the resources available to go into these campaigns, WHY aren’t these brands better?

Posted in JUNE 2019 / Chuck Green is the principal of Logic Arts, a design and marketing firm, a contributor to numerous magazines and websites, and the author of books published by Random House, Peachpit Press, and Rockport Publishers. All rights reserved. Copyright 2007-2019 Chuck Green/Logic Arts Corporation. Contact.